‹ Back
Magazine
View all of Issue 1: "Where" 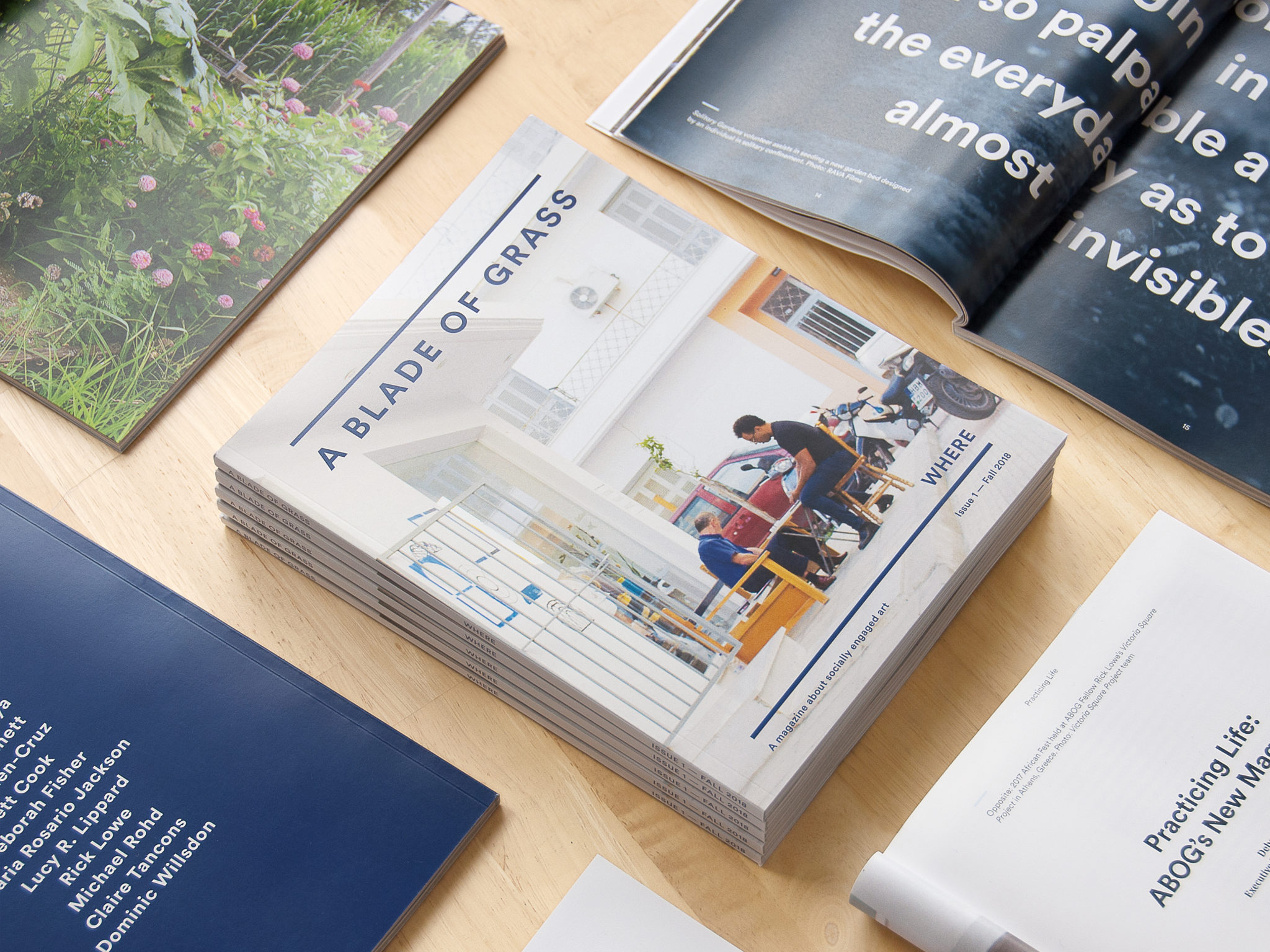 We anchor this inaugural issue of our magazine in the question “Where,” lifting up the tendency of socially engaged art (SEA) to inhabit everyday places, not just those meant for art. While “place” is a more evocative word, it is already laden with expectations of meaning. “Where” is more open — it may begin in mystery, or in so palpable a sense of the everyday as to be almost invisible; it only reveals itself when one experiences something there with the partners or participants with whom an artist has shaped it. “Where” is at the heart of SEA.

The first three contributions, by or about A Blade of Grass Fellows, explore the choice of “where” for socially engaged artists. For the past two decades, Rick Lowe’s art has usually been attached to a geographic context where “people live their lives.” He situates himself as a social sculptor at places where people can come together to think about the growth and development of their communities “beyond just surviving.”

We consider not only the multiple “wheres” of the art project but also the vantage points of people looking at and commenting on jackie sumell’s Solitary Gardens from multiple perspectives: mine as field researcher; those of her partners; and that of curator Claire Tancons, self-described as both under- and over-identifying. What “where” means proves to be less factual than one might think. For me, the location of the gardens in New Orleans’ Lower Ninth Ward magnifies the project, bringing visibility not only to people in solitary confinement but also to a whole neighborhood that has suffered neglect from officials since Hurricane Katrina. For the gardeners in solitary confinement who designed them, quoted here, the space is above all about freedom and natural growth. For others who worked on the project, it has been a revelation about state-mandated penal conditions that are themselves criminal. For curator Claire Tancons, experiencing the Solitary Gardens places her in danger of over-identification, as a person descended from enslaved people, and under-identification, given her class and education.

In an edited version of curator Dominic Willsdon’s On Beginning to Curate Suzanne Lacy, he ponders the particular challenges facing museums exhibiting art that was created for other very particular times and places. Willsdon names his challenge succinctly: “to present Lacy’s collaborative, ephemeral, and context-specific practice (nearly five decades of it) responsibly and in full, in an environment for which it was not intended and which was not designed to support it.”

Michael Rohd’s interview with Roberto Bedoya, Maria Rosario Jackson, and Jamie Bennett on The Future of Creative Placemaking considers where this arts-centered approach to community development is headed, and extends our reach beyond the immediate A Blade of Grass community.

The concept of “where” makes visible a strong tradition of art blurring with life. We reprint critic and feminist Lucy Lippard’s 1976 essay, This Is Art? The Alienation of the Avant Garde from the Audience, as a reminder of socially engaged art’s connection to, yet difference from, the avant-garde. While both stretch art’s habitual boundaries, in socially engaged art, an extended “where” is joined at the hip to an extended “who.” Avant-garde artists, Lippard notes, draw on alternative spaces so that “art recoups its ancient vitality in social life,” but do not necessarily give the same priority to audience. While appreciating the art evoked, Lippard points out that public vitality is not achieved by location alone.

We draw out the question of “where” quite broadly through the inclusion of a horoscope by ABOG Executive Director Deborah Fisher, locating us, as a US election season approaches, in celestial pulls that give us another means of interpreting this moment. We end with Ask an Artist, which will be a regular feature of the magazine, consisting of questions on the issue’s theme to an artist, in this case ABOG Fellow Brett Cook, and his responses.

This project is very much a work in progress. I’m lucky to be part of such a great cohort making it together: Sabrina Chin, Emma Colón, Karina Muranaga, Prerana Reddy, and Deborah Fisher. It’s a distinct pleasure to be part of such a skilled, generous, and committed team.