‹ Back
Magazine
View all of Issue 4: "Governance Reimagined"

Other Ways to Govern 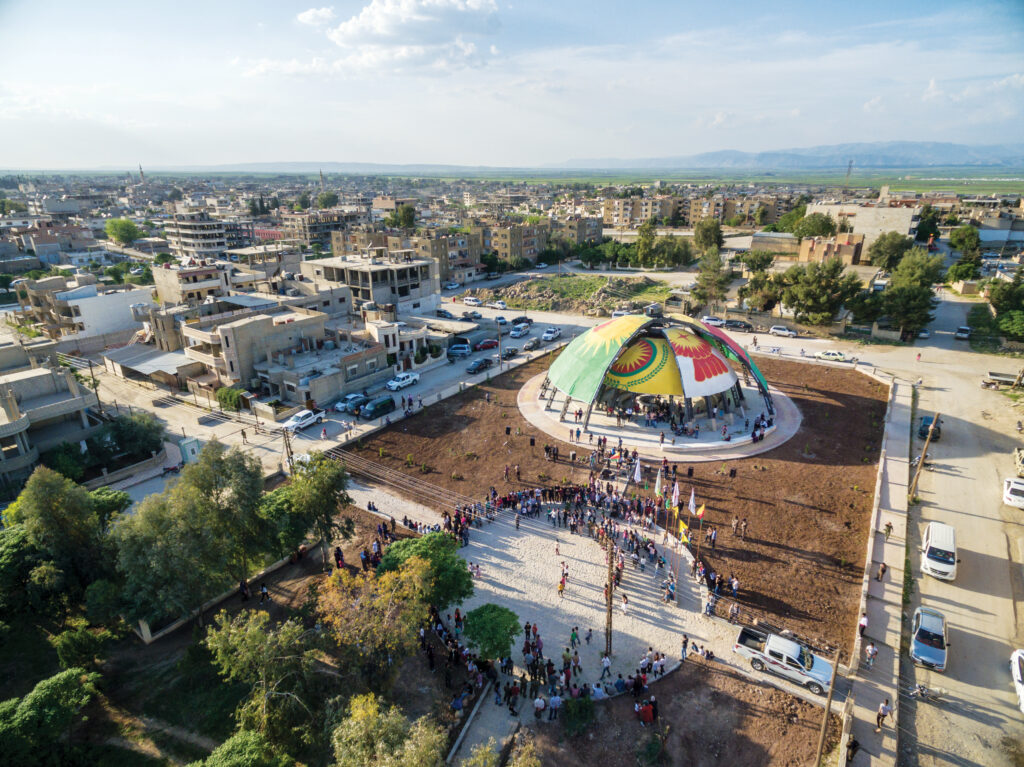 The inauguration of the People’s Parliament of Rojava in Dêrik. Photo by Ruben Hamelink, courtesy of Jonas Staal.

When I joined my high school environmental club in the early 1990s, we made buttons that said “Think Globally. Act Locally.” As corny as it sounds, this concise directive is one that I have been trying to live by ever since. Or at least, I’ve been attempting to figure out what it means to live in such a state, with my mind and my heart in both of these registers. In the midst of a global pandemic, this formulation seems at once imperative and an act of care.

Addressing the question of how to live is one way to reimagine the rules we create to govern human activity, whether they be collective, autonomous, democratic, anarcho-syndicalist, or somewhere in-between the ragged edges of these and many other possible ideological directions. Even in the face of COVID-19, the rise of xenophobic nationalisms, state violence against dissent, and the climate-driven realities of potential human extinction, there are infinite imaginings of other ways for life and its governance to manifest. Consider artists’ experiments in this most practical aspect of society. What governance can do, at what scale, and for and by whom, is at the core of asking, “How do we live?”

In this issue of A Blade of Grass’ biannual magazine, artists from across a diversity of geographies take on how we might live otherwise, how we might rethink governance. From Latin America’s La Plata River Basin, the ancestral Maskoke lands, and Barcelona, to Puerto Rico, New York City, Philadelphia, and the in-between of state-lessness, artists share thinking and projects that perform a particular role: to broaden the capacity of the collective imagination and reinvent governance beyond the stale and undemocratic functions we see enacted in state-houses and capitals across the globe. The through-thread that emerges from the texts that follow, which has also come into vividly high relief as the cracks in governance reveal themselves in a moment of public health crisis, is that the pain and violence of the failures of such governance can also create much-needed space for other ways of being and doing.

Casa Río founder Alejandro Meitin, interviewed by Raquel de Anda, relays the work of a multidisciplinary group of artists, biologists, lawyers, and computer scientists, among others, who are working in a small town in Argentina on researching the ecologically essential La Plata River Basin. The central idea is to use the logics of the wetlands themselves as a model for their own governance, which crosses many national borders from Argentina to Bolivia, Paraguay, and Brazil. Meitin says, “The vision of governance that we speak of is … the construction of a political muscle that is developed from a territorial perspective and what we define as the vocation of place.”

Marcus Briggs-Cloud tells the unfolding story of a quest to re-create the nearly-lost Indigenous language of the Maskoke whose ancestral lands are what is colonially named Alabama and Georgia. He describes the organization of an eco-village called Ekvn-Yefolecv [ee-gun yee-full-lee-juh], a phrase in Maskoke with the double meaning of “Returning to the Earth” and “Returning to our homelands.” Briggs-Cloud’s story so centrally positions the question of ‘How do we live?’ that Ekvn-Yefolecv seeks to create the specific living conditions that make the language possible. He writes, “In order to see a real reversal of language loss, we have to altogether change the way we live.”

Artist Jorge Díaz Ortiz tells of AgitArte, a collective project based in Puerto Rico that has created cooperative, self-governing, mutual-aid structures in the face of natural disasters and government corruption. He speaks of the necessity of cultural and solidarity work when government structures fail, as they did in Puerto Rico in the wake of Hurricane María and the multiple earthquakes last fall. He says, “The fissures created after catastrophes in the management of emergencies by the state, can create conditions for breaks in the hegemony of our colonial state and permit for new structures of governance and power.” The work of these collective efforts joining together was made possible, therefore, by the very conditions of crisis.

Laura Hanna and Thomas Gokey, two founders of the Debt Collective, discuss how debt relief, particularly student debt relief, traveled from the assemblies of Occupy Wall Street to the strategic debt purchasing and cancellation of Strike Debt and the Rolling Jubilee, and now into national political agendas as they have been articulated by both Elizabeth Warren and Bernie Sanders. Hanna suggests that the abolition of debt not only creates an economic impact, but also “end[s] a systemic harm rather than simply cancelling out an action,” which, importantly, is a reparative effort to address the emotional and psychological impacts of long-term debt.

Miguel Robles-Durán interviews Gala Pin and Laia Forné, two expansive thinkers and activists who joined the En Comú Podem government in Barcelona, and have firsthand experience of attempting a reinvention of public administration from the inside. Pin and Forné share some of their work, including their participation in a new transnational governance project initiated with Robles-Durán, renowned Marxist economic geographer David Harvey, and a cohort of individuals from around the globe (including me) to facilitate bottom-up, grassroots initiatives in urban zones.

Artist Li Sumpter shouts out a cross-section of projects that connect art, technology, and Afrofuturism as methods to revolutionize storytelling towards social transformation. Her examples range from The Colored Girls Museum in Philadelphia, which stakes out space for the stories of Black and Brown women and girls, to Wangechi Mutu’s groundbreaking bronze sculptures installed on the façade of the Metropolitan Museum of Art in the fall of 2019.

Dutch artist Jonas Staal’s writings from 2014 “propose a necessary art of the stateless state—an art not subject to prehistoric cultural and political structures, but an art that is a driving, imaginative force redefining the space and practice of the commons.” Here he describes his work with assemblies of stateless peoples and those considered “terrorists” (who are therefore denied state affiliation), which led to his work with the Rojava Revolution, among other projects. It is in this text that Staal begins to articulate a form of propaganda art that is centered on radical mutual liberation.

From the physical and metaphorical territories explored in the articles that follow, a common thread is the space created by the eroding credibility of state governance. Artists are responding by occupying this gap and reimagining governance in radical, equity-based ways. There is much to learn from these culturally grounded, transdisciplinary efforts. As Staal writes, “Democracy may well have been made possible by state structures, but in order to shape its core principles of egalitarianism—the equal distribution of power and knowledge—we must liberate it from the state, thus disentangling its power monopolies and oligarchies from the capitalist doctrine.” Whether ignoring the state, refusing it, undermining it, or transforming it from the inside, there is no doubt that reevaluating and reinventing the way we live and how we govern ourselves constitutes a contemporary urgency, and art is mapping the potential.

Laura Raicovich is a writer, curator, and art worker who is focused on the intersections of art and life. She is currently the Interim Director of the Leslie Lohman Museum and is writing a book about museums, cultural institutions, and the myth of neutrality (Verso, 2021). In 2019, she was a Rockefeller Foundation Fellow at the Bellagio Center and recipient of the inaugural Emily H. Tremaine Journalism Fellowship for Curators at Hyperallergic. She formerly served as President and Executive Director of the Queens Museum where she oversaw a vital commons for art, ideas, and social engagement. Raicovich also inaugurated Creative Time’s Global Initiatives, launching the artist-driven media project, Creative Time Reports, and directing the Creative Time Summit, an annual art and social justice conference. She worked for a decade at Dia Art Foundation and has held positions at the Solomon R. Guggenheim Museum, Public Art Fund, and New York City’s Department of Parks and Recreation. She also lectures and organizes programs and projects internationally.