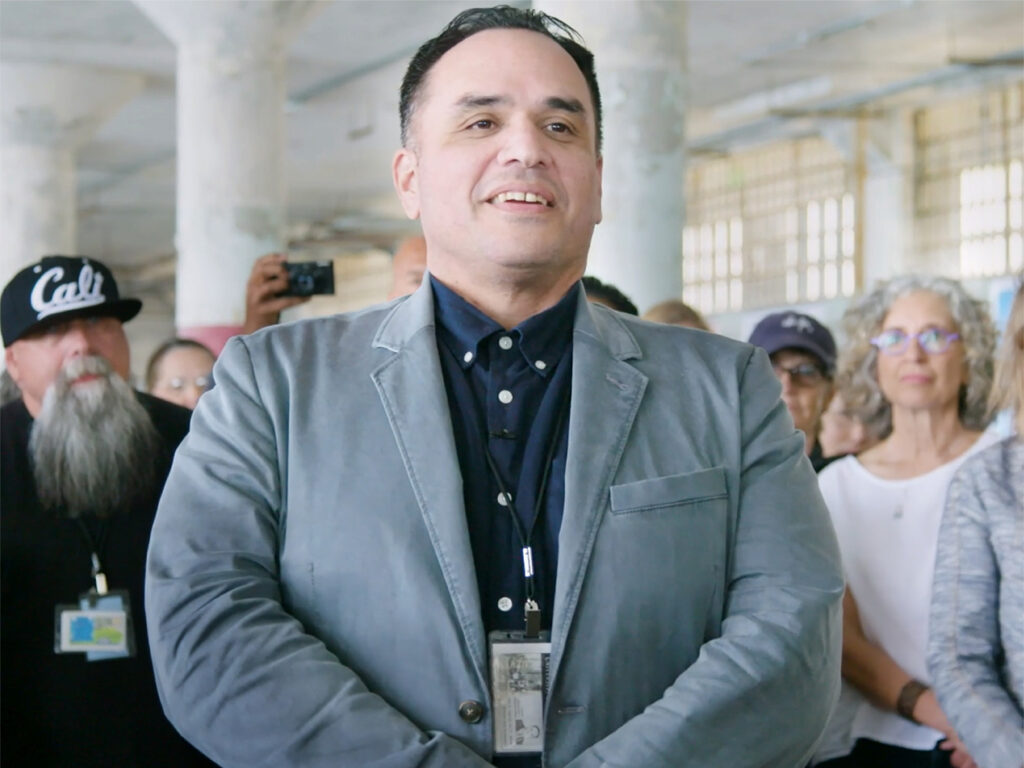 As the A Blade of Grass-David Rockefeller Fund Joint Fellow in Criminal Justice, Gregory Sale, along with a committed group of arts and justice advocates, translated reform efforts into a visual language to reframe the narrative of reentry. Future IDs at Alcatraz featured ID-inspired artworks created by and with individuals with conviction histories as they conceived a vision for a future self. Presented in partnership with the National Park Service and the Golden Gate National Parks Conservancy, the exhibition acted as a container for a series of community programs, co-created with over 20 community partner organizations.

Join Gregory Sale and Future IDs creative team members Dominique Bell, Kirn Kim, Sabrina Reid, Dr. Luis Garcia, and Lumumba Edwards for a conversation celebrating the release of the film. Participants will discuss their relationships with Future IDs, reflecting on the project and speaking to the role art can play in transforming the criminal justice system. Moderated by A Blade of Grass Director of Programs, Prerana Reddy.

The 9-minute film will be shown just prior to the conversation on August 27. It will also be available starting Monday, August 24 on A Blade of Grass Films’ channel on ALL ARTS. The premier kicks off a month-long focus on artists transforming the criminal justice system with a new artist’s work featured each week.

Watch the film “Reimagining Reentry at Alcatraz.” This short film documents the impact of Future IDs at Alcatraz, a socially engaged art project, exhibition, and community program series about justice reform and second chances on the iconic-prison-turned-national-park in San Francisco Bay from fall 2018 to fall 2019.

Gregory Sale is an artist and an associate professor, School of Art, Herberger Institute of Design and the Arts, Arizona State University. His large-scale, long-term projects engage issues of mass incarceration and reentry, illuminating the complexities of race, democracy, and how we care as a society. His most-known projects include It’s not just black and white (2011) at ASU Art Museum and Future IDs at Alcatraz (2018-19) for the iconic prison-turned-national-park in San Francisco Bay.

Dominique Bell is a justice activist, a thought leader, and a founding member of the Los Angeles-based Anti-Recidivism Coalition. This support network for formerly incarcerated individuals advocates for criminal justice reform demonstrating how storytelling can not only enlighten and persuade, but also shift public perception about second chances. A Loyola Marymount University alumni, who graduated with a degree in African-American studies, Dom’s most recent advocacy work focuses on the Coronavirus epidemic and its deleterious effect on people’s livelihood.

Kirn Kim, as a former juvenile lifer (20 years) knows about the importance of second chances. As Program Associate, he became the first employee of California Endowment, the state’s largest public health foundation, with a conviction history. He advocates for criminal justice reform in a variety of political and cultural contexts, concentrating on juvenile justice and issues specific to Asian Pacific Islanders and other ethnic and socio-economic groups.

Sabrina Reid is an artist, advocate, and re-entry specialist who has served on the San Francisco District Attorney’s Advisory Board of Formerly Incarcerated Individuals and as the former Co-chair of the Bay Area Anti-Recidivism Coalition. After spending 25 years in and out of state and federal prisons, she now helps others successfully transition from institutionalization to the community. She does this through her ability to network with justice organizations from Delancey Street Foundation to No Violence Alliance to the Sheriff’s Office.

Dr. Luis Garcia is a social-service administrator and re-entry advocate. He is currently the Director of Programs & Services at the Weingart Center in Los Angeles, supporting LA’s Skid Row community and helping the homeless transition to permanent housing. Dr. Garcia earned his high school diploma in LA County jail and his Doctorate of Educational Leadership for Social Justice from Loyola Marymount. He focuses on issues of higher education in carceral settings, restorative justice, and collateral consequences.

Lumumba Edwards is a Bay-area painter and leading member of MC Arts and Culture, an organization devoted to preserving African American cultural art forms. Freed in 2018 after almost 41 years of incarceration, Lumumba now uses his arts practice to help “heal and stop the violence in the community.” His artwork captures life’s struggles, as well as its successes and blessings, conveying a message of black beauty, family, unity, and spirituality.