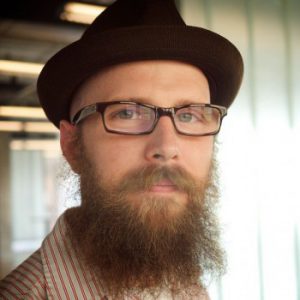 Steve Lambert’s father, a former Franciscan monk, and mother, an ex-Dominican nun, imbued the values of dedication, study, poverty, and service to others – qualities which prepared him for life as an artist.

Lambert’s work has been shown everywhere from museums to protest marches nationally and internationally, featured in over fourteen books, four documentary films, and is in the collections of The Sheldon Museum, the Progressive Insurance Company, and The Library of Congress. Lambert has discussed his work live on NPR, the BBC, and CNN, and been reported on internationally in the Associated Press, the New York Times, Harper’s, Newsweek and others. He is also the founder of the Center for Artistic Activism, and the Anti-Advertising Agency. He was a Senior Fellow at the Eyebeam Center for Art and Technology (2006-2010). He lives in Beacon, NY and is an Associate Professor at SUNY Purchase.