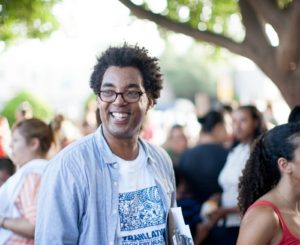 Rick Lowe is an artist whose community-based practice led him, along with six other artists, to found Project Row Houses (PRH), where he currently works as Founding Director, an organization that has transformed a neglected neighborhood in Houston into an expansive and visionary public art project. PRH, which started on a block and a half of derelict properties, is now an internationally recognized arts venue and community support center focused on transforming the community while preserving its culture. Among his honors are the Rudy Bruner Award in Urban Excellence, the AIA Keystone Award, the Heinz Award in the arts and humanities, Loeb Fellow at Harvard University, Mel King Fellow at MIT, Skowhegan School of Painting and Sculpture Governors Award, Skandalaris Award for Art/Architecture, and USA Artists Booth Fellow. For his vision and effort, President Barack Obama appointed Lowe to the National Council on the Arts in 2013, and Lowe was named a MacArthur Fellow in the class of 2014.