Throughout this exchange, I keep thinking of what socially engaged art is amidst a growing constellation of projects or practices I come in contact with. Here in Chicago there are projects that have a long and useful history in quiet communities and in exhibition spaces. Working in art education, it sometimes feels there is a emphasis on describing the field by what it is not. This reads to me like an opposing set of conditions rather than a description of all that already overlaps, which could serve to accentuate complex and interactive opportunities for dynamic work.

It is increasingly difficult for me not to slip into personal accounts. The considerations raised here, with the romantic ideas of being an artist, experiences and incantations, questions of purpose and influence, seem perfectly appropriate. I agree with Mary about the studio and the value of that quiet, productive space to work out the ideas in my head, which has remained a pursuit as long as I can remember. I have other things I work out while at the studio that are not about art worlds and recognition. Teaching and working with young artists and teachers, I have found that conversations around socially engaged art add to a wider and more participatory conversation that opens a deeper understanding of what artists do and why, community artistry, political activism and broad notions of access, civic engagement, history and expectations.

I, too, recognize the frameworks that people have shared and the working systems that have been discussed, with some nod to the past. For me, these ideas were shaped early on by extremely traditional works in printmaking and film for political awareness, environmental art and natural wonders, Happenings and various experimentations on and off the streets in theater, poetry and anti-art movements, all of which are only one part of my art history and art education. I think of what I have read and been inspired by — obscure literature, early photographs of secret societies, gorgeous drawings by sculptors — that have kept me hooked and connected to working things out in similar ways for many years. I still rely on the handful of tools I was introduced to early on and the indelible images that are still impossible for me to retreat from. I would like to imagine it is a thoughtful pursuit towards a deeper understanding of how my experiences forge forward progress.

The community as a worksite was first shaped by my sense of place as a resident, and many ideas I had about other communities that I formed early on were simply wrong. These were ideas I had from what people shared with me and they were about class and about race. Socially engaged art is a term I remember first hearing and using with the artist Michael Piazza in 1991 as we directed our attention in similar directions from very different influences. The free breakfast programs organized by the Black Panthers, community art efforts connected to voter registration drives and organized neighborhood cleanups laid out a groundwork where I imagined communities as creative places. These are still influential programs with neighborhood business councils and places like the Hull House, where the social is as connected to the settlement as it is to the migration of the artist moving about the city.

Recently I read a lecture by Zach Rockhill that I first heard in Kansas City where he combined and collided four individual, seemingly unrelated situations. He found some way towards a center, a psychic miasma that hovered around me throughout the talk, while also registering a wordplay on public art, politics, timing and a willingness to think through imaginative connectivity that I found both brilliant and elegant. Rockhill first spoke of his travels abroad with students in 2009 to recreate Allan Kaprow’s 1961 work Stockroom, while also expounding on his deep fascination with the book Solaris by Stanislaw Lem, also published in 1961. It was as if his rereading of the book had provided him with space to work out an idea that he was approaching, albeit unformed and unknown. (I think about those redundant actions too.) Rockhill went on to relate a 2009 news account from LaGuardia Airport about Scott McCann, a passenger who had a history of psychotic episodes and was stopped by security on the jetway while attempting to get to California to visit his mother. McCann was detained for having what authorities believe to be a bomb which upon inspection appeared to be a time machine. Rockhill ties this incident to Chris Marker’s 1962 film La Jetée, which also concerns a time machine, the search for a mother, and an airport, highlighting the curiosity one might imagine in revealing irrevocable associations that only appear to be unintentional. McCann was later sent to Bellevue and almost immediately went into a catatonic state, which Rockhill argues could be actual time travel. With this is mind, I think of this exchange and connecting our impressions through so many different sources, the associations of our work and history, and the protective abilities of language.

The original installation of Allan Kaprow’s Stockroom in 1961. (Image via UnDo) 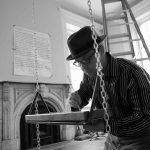