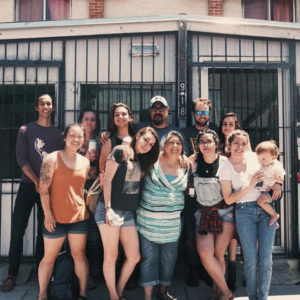 Tornillo: The Occupation Coalition began as a convergence of artists and activists from around the country who came together to occupy the children’s detention camp that opened in Tornillo, a suburb of El Paso, Texas. After the camps closing the group remained, working on the front lines of migrant rights under the mission of “Resistance & Assistance.” They combine ongoing cultural actions informed by the historical precedence of the city, as a catalyst for racial and social justice, with direct assistance to refugees in migration. The collective seeks to disrupt the normalization and marginalization of the human rights crisis happening on the US-Mexico border. For their new project, Casa Carmelita, the coalition acquired a permanent space located at the border checkpoint and named it after Carmelita Torres, considered a Rosa Parks figure of Mexican-American rights. The Fellowship was awarded in support of this new space and its planned programming, such as Food Not Walls, a meals program that provides culturally appropriate, nutritious food to those in El Paso shelters and the tent encampments across the border. It will also house visiting artists and activists that will conduct healing rituals and artmaking workshops with a social justice perspective.