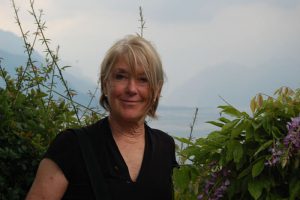 Suzanne Lacy is an artist whose prolific career includes performances, video and photographic installation, critical writing and public practices in communities. She is one of the Los Angeles performance and conceptual artists who became active in the seventies and shaped the emergent art of social engagement. Her work ranges from intimate, graphic body explorations to large-scale public performances involving literally hundreds of performers and thousands of audience members. Her recent 2013 project with Creative Time and the Elizabeth Sackler Center at the Brooklyn Museum involved 360 men and women on stoops in Brooklyn discussing the intersection of activisms. She is founding chair of the MFA in Public Practice at the Otis College of Art and Design.

Her ABOG Fellowship supported De tu Puño y Letra, which intersected public, legal and educational institutions’ efforts to fight violence against women with an organizing project in Quito, Ecuador. Working with the City government, colleges, non-profits, leaders, volunteers and youth to address the dimensions of violence against women, it culminated in a public performance on November 25, 2015, the International Day for the Elimination of Violence Against Women. The project was built on a prior, well-received 2014 national campaign, “Cartas de Mujeres,” that invited women to publicly submit their testimonies on experienced violence. Produced by the Fundación Museos de la Ciudad in collaboration with scores of colleagues in Quito, this project engaged significantly with men in the region. 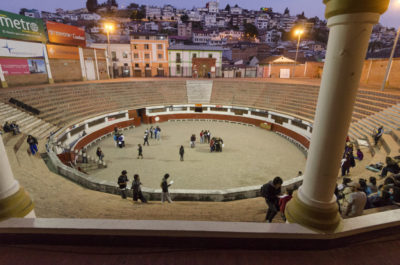 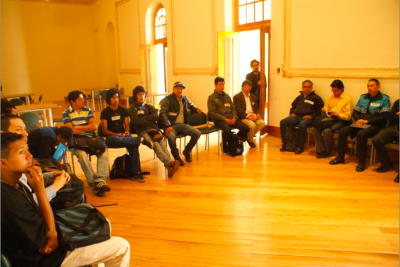 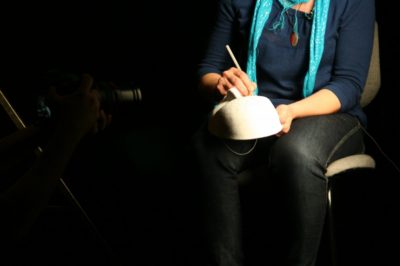 Tattooed Skeleton (2010) was a year-long examination of domestic violence in Madrid where women’s narratives of violence were recorded by hand on white masks, among other performances and interventions. Photo courtesy the artist. 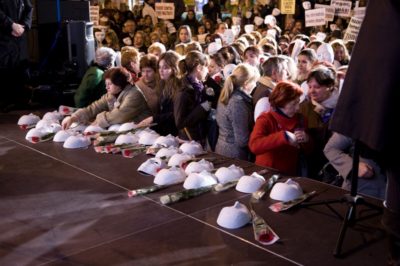 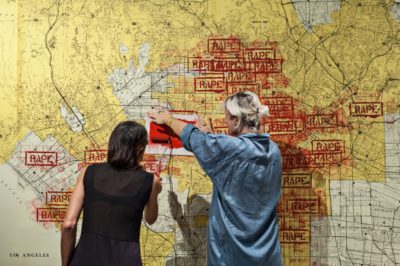 Three Weeks in May (1977), revisited for Museo Pecci Milano, 2014. A recreation of Lacy’s seminal three-week series of private conversations and public performances on the topic of rape in Los Angeles, California. Photo by OKNO Studio. 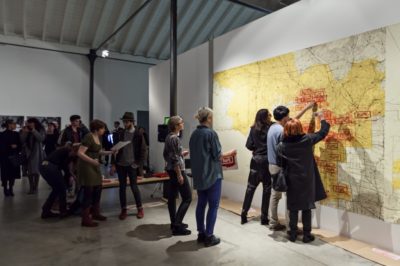 Between the Door and the Street (2013) grew out of a series of wide-ranging conversations between Lacy and a group of activist women in New York City, and culminated on October 19, 2013, with a public performance on sixty stoops in Brooklyn, featuring conversations about gender, race, ethnicity and class. Photo by Nicola Goode. 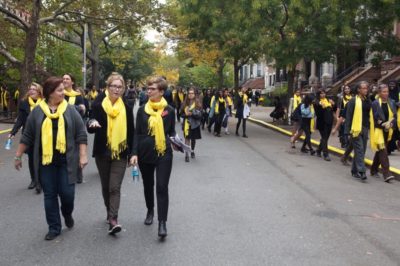 Between the Door and the Street, 2013. Photo by Nicola Goode.

Cleaning Conditions (An Homage to Allan Kaprow), a performance for the ‘do it’ exhibition, Manchester Art Gallery, December 17, 2013. Photo by Allan Seabright. 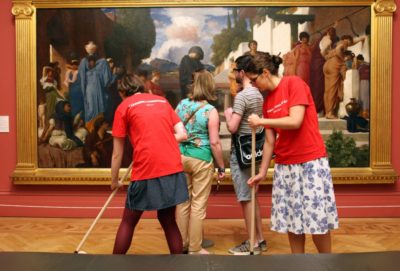 Cleaning Conditions (An Homage to Allan Kaprow), a performance for the ‘do it’ exhibition, Manchester Art Gallery, December 17, 2013. Photo by Allan Seabright.

Andrea Bowers and Suzanne Lacy: Drawing Lessons (2014) was a nine-day installation at The Drawing Center in New York City, during which artist Andrea Bowers attempted to teach Suzanne Lacy to draw in lessons that were open to the public. 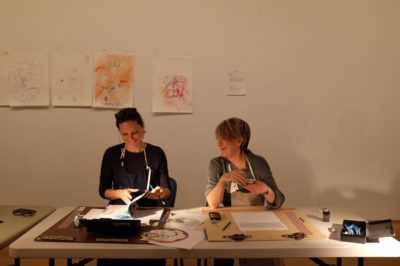