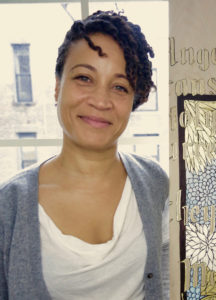 A Blade of Grass-SPArt Fellow for Los Angeles

Rosalind McGary, the second A Blade of Grass-SPArt Fellow for Los Angeles, is a visual artist and curator who grew up in Compton, left to pursue her career and returned to initiate the Sēpia Artist Collective, which supports space making and collaborative opportunity for artists of color living and working in South Los Angeles. While conducting research for an exhibition on Compton’s revolutionary first Black Mayor, Douglas F. Dollarhide (elected in 1969), McGary discovered an archive of the Compton Communicative Arts Academy, an artist’s collective active in the 1970s, where artists working in the city were supported with funding, exhibition, studio, and performance space. In turn, they served the community by mentoring and encouraging young artists. Recognizing the restorative potential of making the documentary materials she has uncovered more visible, McGary will undergo an art-based research process to produce arts projects in the city that are community centered, and seek out similar participation and support from city and county leadership that the Arts Academy formerly enjoyed. McGary wishes to generate an intergenerational knowledge exchange that instills a sense of potential for a prosperous and productive future, based on a sense of pride for past and current accomplishments within a city that has been unjustly dominated by a false narrative that minimizes its residents’ achievements. In reclaiming Compton’s narrative, McGary seeks to establish arts and cultural production as a legitimate force for political and economic change.

The third in a series of exhibitions across the U.S., ICONIC Black Panther: Chicago opened at Stony Island Arts Bank hosted by Rebuild Foundation. Curated by Tracie D. Hall for SEPIA Collective in partnership with University of Chicago Center for the Study of Race, Politics and Culture, ICONIC Chicago featured over 50 artists interpreting the over 50-year history of the Black Panther Party. Video courtesy of the artist.