As an ABOG Fellow, Freeman Word will create the Zakatu Madrasa, a cooperatively owned and operated spiritual subscription bookstore in St. Louis. Referring to historical African educational institutions (both secular and religious), the Madrasa will bring together artists, educators, activists and young people of color to co-create art addressing regional social issues. 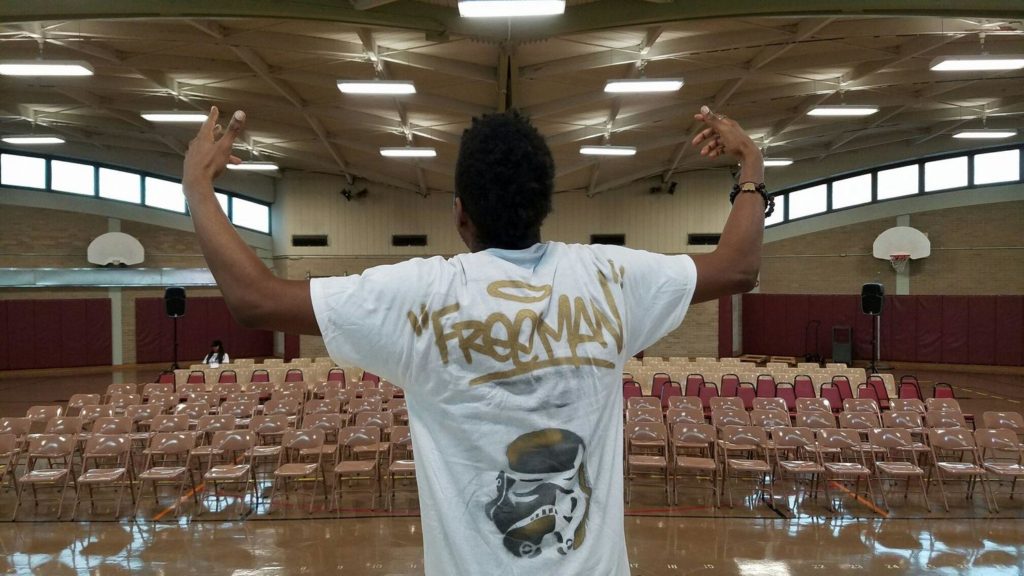 Taken from inside the Juvenile Detention Center, St. Louis, only moments before youth, which Word coached, took the stage to perform for a live audience during Hip Hop Poetry Week. Writing workshops and performance workshops are combined in a short one week burst to produce a show in which youth voices are heard by attentive community members. Photo: Martell Stepney 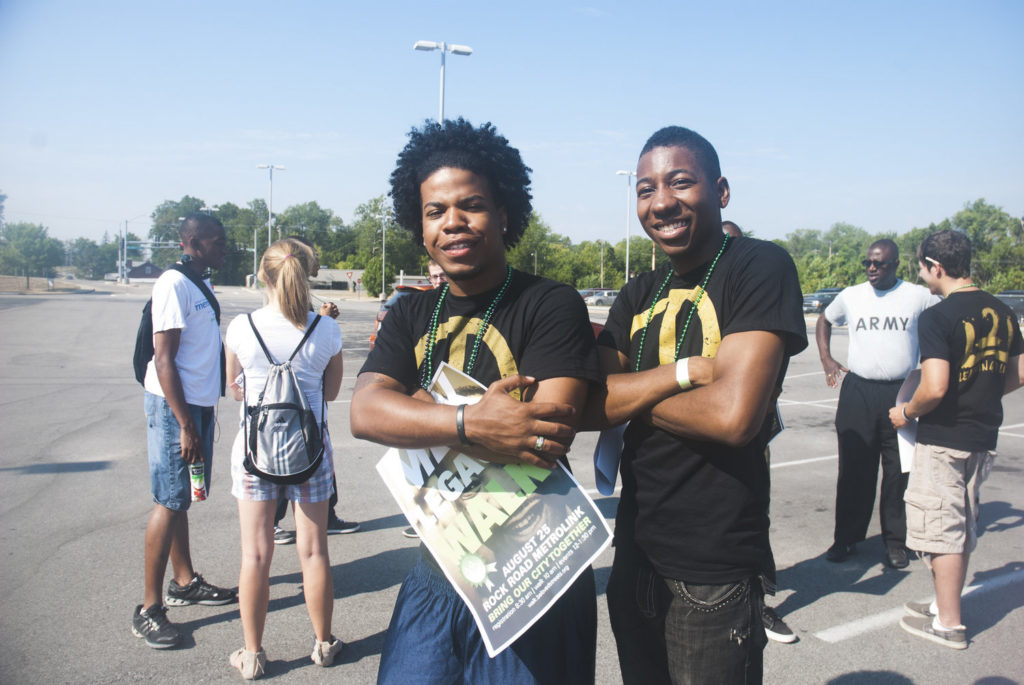 Much like the environment pictured here, Word plans to use his connections to build community outreach partners who will hit the streets and rally youth using the verve of youth and the wisdom of the aged. Photo: Julie Kellman 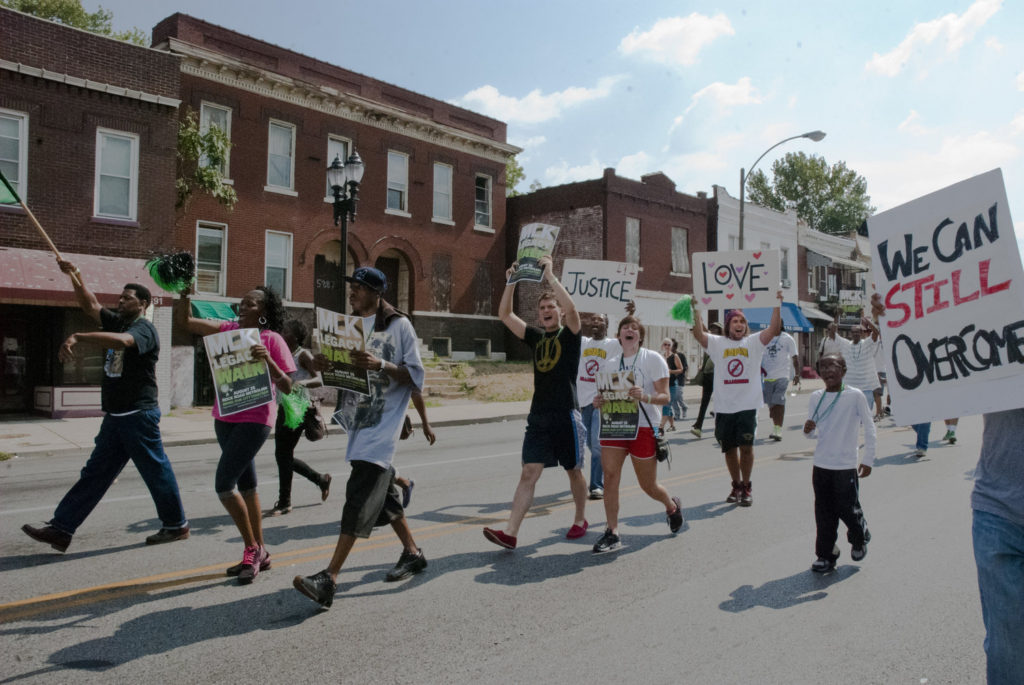 Word sees the energy of unrest as fundamental to the energy of organization. Activists from past endeavors, such as the one pictured above, will form the core organizing committees of the Zakatu Madrasa. Photo: Julia Kellman 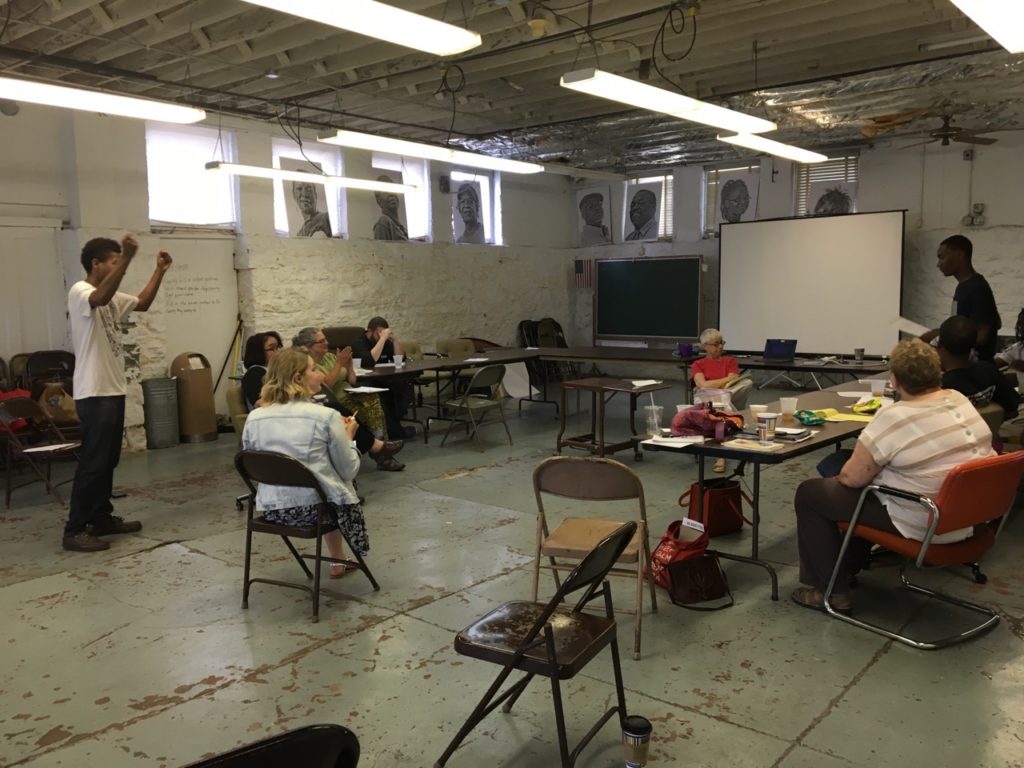 In forming the Worker’s Opera, a Bread & Roses Missouri production which he co-directed, Word employed a variety of fast-paced writing and performance activities to generate content. He is hopeful to use the same methodology to inspire the participants of the Zakatu Madrasa into action. Photo: Rachel Sacks

After participating in the premiere Martin Luther King Legacy Walk for St. Louis co-organized by Freeman Word, a man demonstrates Pan-African pride by waving a red, black, and green flag in the streets of St. Louis. The concept of unity among people is a founding principle of the Zakatu Madrasa, which plans to use the Nguzo Saba as its guiding principles. Photo: Luke Terrell 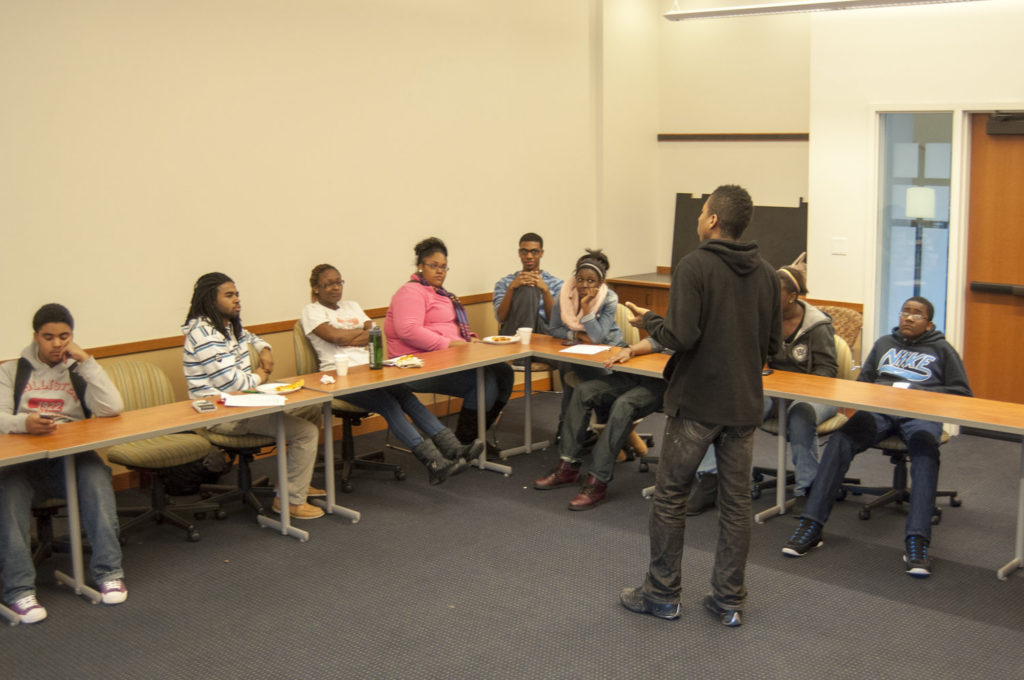 In a youth mentoring summit, Freeman gives an overview to mentors and mentees on the importance of establishing rapport and genuine relationships. Courtesy of the artist. 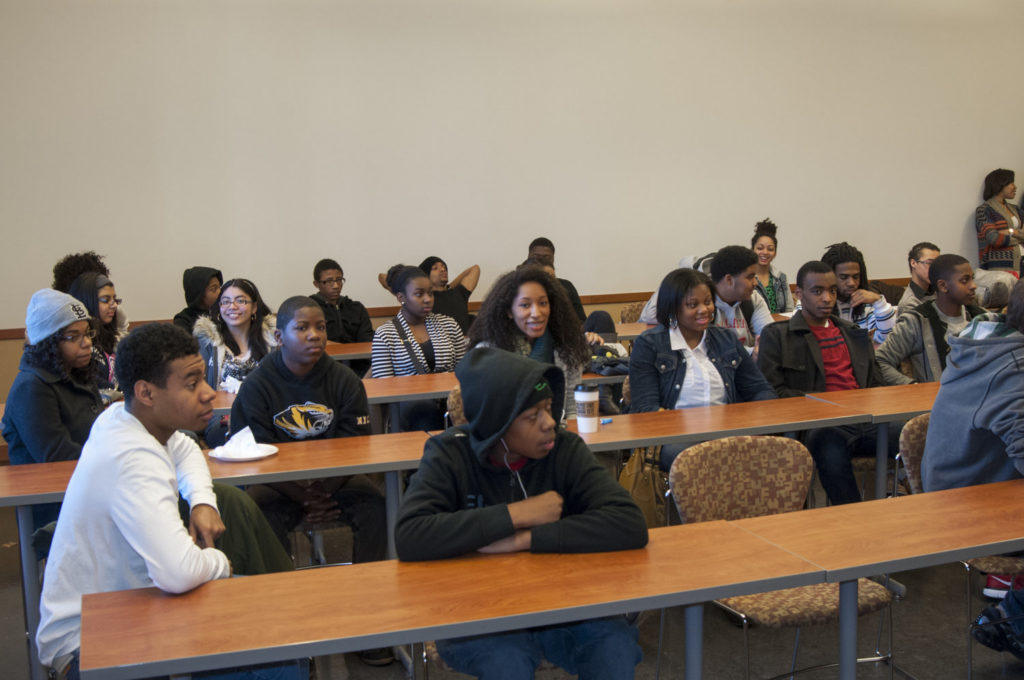 Word co-founded a mentoring program which paired St. Louis High School students with Washington University in St. Louis students called “Learning To Live.” Pictured here is the relaxed, “come as you are” atmosphere that he and his team were able to accomplish. He hopes to develop a similarly comfortable environment for youth in the Zakatu Madrasa. Courtesy of the artist.

Students compete to see who can solve a mathematical problem fastest after receiving culturally relevant tutoring from other people of color. Courtesy of the artist. 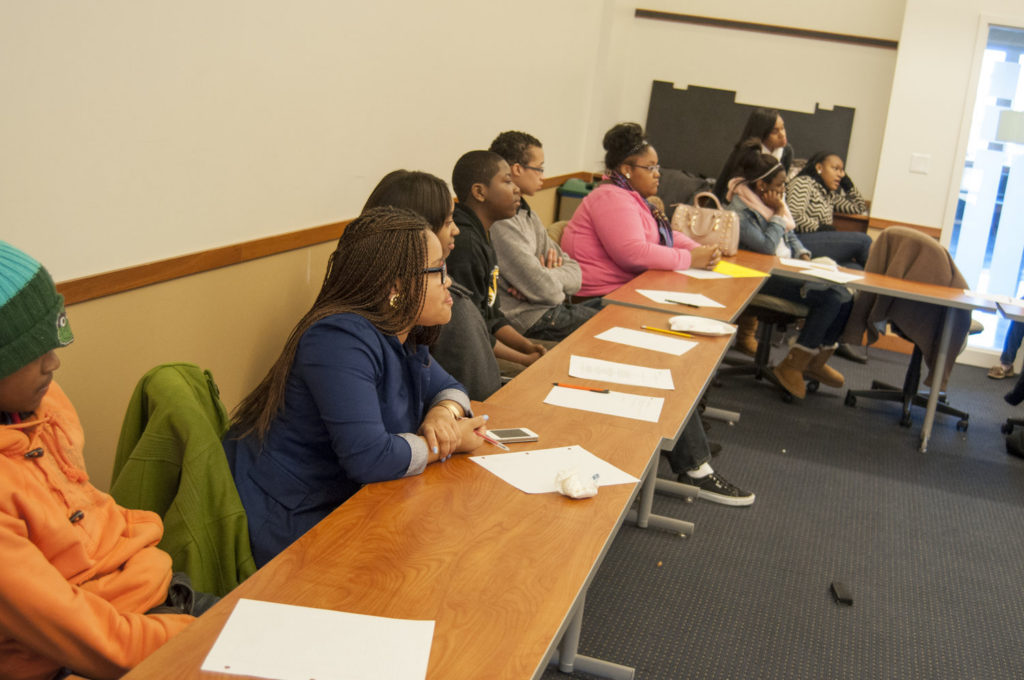 Using the same skills gathered from other projects working with youth, Word believes that Zakatu Madrasa can draw youth who otherwise wouldn’t show up to other projects by using art and establishing a basis of cultural relevance. Youth pictured here were high school aged and showed up of their own will on a Saturday to attend classes and learn collaboratively. Courtesy of the artist. 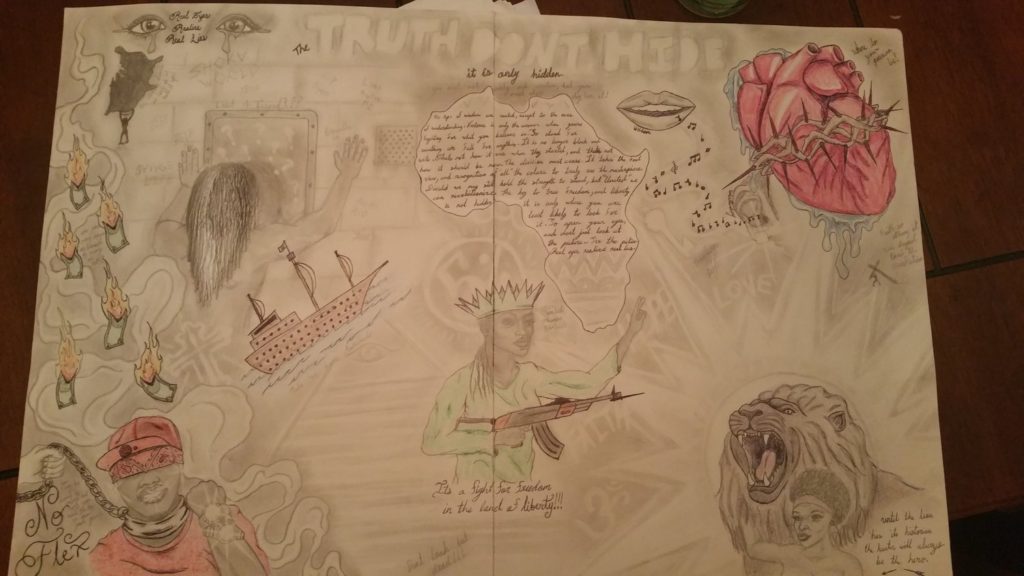 At a workshop given inside of one the St. Louis city jails, an inmate created a mural of “Liberation Ideology” that helped to inspire the formation of the Zakatu Madrasa. Mural by Rio, photo courtesy the artist.