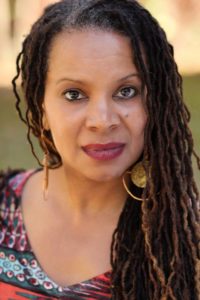 As an A Blade of Grass Fellow, filmmaker Daresha Kyi will collaborate with a community of self-identified “mama bears,” conservative, Christian mothers who accept and affirm their LGBTQ+ children, despite potential rejection from their religious communities, to create a feature-length documentary, Mama Bears. In partnership with affirming pastors and churches, as well as religious, LGBTQ+, and civil rights organizations, Kyi and her team will work with the mothers to craft a unique outreach plan to bring them face to face with churches and congregations wrestling with “the LGBTQ question,” so that they can share their powerful testimonies about their journeys of acceptance. Outreach will include film screenings, workshops, Q&A sessions, and panel discussions at churches and community centers across the country.

Daresha Kyi is an award-winning filmmaker who writes, produces, and directs film and television in Spanish and English. In 2018 Daresha was commissioned to direct a short film on transgender rights for the ACLU which garnered 1.7 million views on YouTube and recently screened at SXSW Festival.  She also directed a series of mini docs for the Family Independence Initiative about their work empowering families to escape poverty last year. In 2017 Daresha co-directed and co-produced the feature-length documentary Chavela, which won the 2nd place Panorama Audience Award at the Berlinale and was distributed theatrically nationally and internationally. She also produced Dispatches From Cleveland in 2017.

Daresha was a 2017-18 fellow in the Firelight Media Documentary Lab and is currently part of the 2019 Chicken & Egg Eggcelerator and Creative Capital cohorts and she has produced television for FX, WE, AMC, Oxygen, E!, Telemundo, Bravo, and FUSE, among others.

Kimberly and Kai at the 2017 FACE awards where Kimberly won an award as “LGBTQ Activist of the Year,” photo courtesy the artist.

Kai coloring in her favorite cat suit and ears! Photo courtesy the artist.

Kai gets her nails done before the FACE awards, photo courtesy the artist.

Sara and Parker Cunningham on the road in Laramie, WY on their second Free Mom Hugs Tour, photo courtesy the artist.

Sara gives out free hugs at Stonewall Inn at the end of the first Free Mom Hugs Tour, photo courtesy the artist.

Marlee & Tabatha Castillo share a kiss at their wedding where Sara Cunningham served as a “stand-in mom” for Tabatha, photo courtesy the artist.