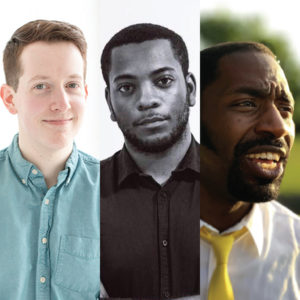 Director Alex Hare, writer/director Zhailon Levingston, and composer Nehemiah Luckett are embarking on the Burning Church Project, a traveling developmental series supporting the creation of their new musical A Burning Church. The show depicts moments in the life of a Baptist church in Alabama over the last four decades, aiming to ask questions about the radical potential of the contemporary church in the United States. The project engages with a sector of American society that is often seen as entrenched in conservative politics, and seeks to develop dialogues with church-goers about Christianity’s relationship to capitalism, sexuality, police violence, and more. The artists were chosen for their proposal to visit three churches in the U.S. and perform segments of the play, inviting feedback from the audiences and initiating discussions with congregants and community-members. The project culminates in a theatrical run in NYC, which will incorporate the dialogues the artists had with church-goers around the country.

Workshop cast of A Burning Church, a kaleidoscopic new musical dramatizing the recent history of a black church in Alabama over the last thirty years, tracing the lives of its leaders and congregants amidst political movements, tragedies, and possibly, spiritual rebirth. Photo by Erik McGregor, lighting by Katie Whittemore.

Cast members Nathan Hinton and Gary Vincent participate in a workshop for A Burning Church
at the New Ohio Theatre in 2019. Photo by Erik McGregor, lighting by Katie Whittemore.

Cast members Ashley Jones and Marla Louissaint participate in a workshop for A Burning Church
at the New Ohio Theatre in 2019. Photo by Erik McGregor, lighting by Katie Whittemore.