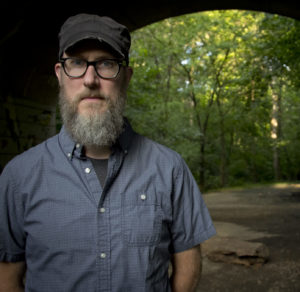 As an ABOG Fellow, Brian Harnetty will create Fracked Forest Listening Rooms. The project invites local community members, including miners and construction workers, near the town of Shawnee in rural Appalachian Ohio to gather and critically listen to various outdoor spaces in the Wayne National Forest. Locations range from the cave where the United Mine Workers secretly formed, to the site of a mine fire 130 years ago, to a contemporary fracking drill site. Participants might hear flowing water, bird calls, industrial rhythms, and archival sounds of oral histories, disasters, and protests. After the listening session, participants will share their own experiences, hopes, and fears. These stories will be recorded and remixed into future sessions, creating a continually expanding feedback loop. The result is a sonic map of the complex past and present of the forest, revealing the thoughts, tensions, and emotions of its people.

Brian Harnetty is the 2018 ABOG Fellow for Contemplative Practice, in partnership with the Hemera Foundation. This targeted fellowship supports artists who work with the intersection of social practice and contemplative practice.

Brian Harnetty is an Ohio-based interdisciplinary artist who works with sound and sound archives. His body of work contends that the act of listening to places and their sonic pasts can transform their futures.

A 2016 recipient of the Creative Capital Performing Arts Award, Harnetty is deeply involved with local issues of Appalachia and the Midwest. He connects sound archives with performance, ecology, and place. Through composition, performance, writing, and installation, his pieces transform archival material–including field recordings, transcriptions, and historic recordings–into newly re-contextualized collages. For more than a decade, this has led to projects with archives such as the Berea College Appalachian Sound Archives in Kentucky, the Sun Ra/El Saturn Archives in Chicago, and the Anne Grimes Collection in the Library of Congress. Harnetty’s recent work listens to the historic, economic, cultural, and environmental sounds of Appalachian Ohio, informed in part by his family’s roots in the region.

Harnetty’s music is on Dust-to-Digital, Atavistic, and Scioto Records. He has collaborated with many musicians, including Will Oldham (Bonnie “Prince” Billy), Fred Lonberg-Holm, Paul De Jong (The Books), and Anna Roberts-Gevalt (Anna & Elizabeth). Harnetty has written articles and essays for New Music Box, Experimental Music Yearbook, Sound Effects, and Cultural Studies. He has received two Ohio Arts Council Individual Excellence Awards (2016, 2003), commissions from the Wexner Center for the Arts, Duke Performances, and Contemporary Arts Center (Cincinnati), and additional grants and fellowships from the National Performance Network, Berea College Appalachian Sound Archives, and the Promusica Chamber Orchestra. His 2013 release, The Star-Faced One: from the Sun Ra/El Saturn Archives was MOJO Magazine’s Underground Album of the Year.

Harnetty discussing his work Shawnee, Ohio with high school students in the Pages Program at the Wexner Center for the Arts. Columbus, Ohio, 2016. Photo: Katie Spengler.

A post-performance discussion about Shawnee, Ohio at the Wexner Center for the Arts. Columbus, Ohio, 2016. Photo: Kevin Davison.

A gallery view of Shawnee Revisited, a sound and video installation exploring the past and present of energy extraction in Appalachian Ohio. At Carleton College, Northfield, Minnesota, 2018. Photo: Brian Harnetty.

A still from To Hold, To Keep, a sound and video installation of local archives at the Massillon Museum of Art. Massillon, Ohio, 2016. Photo: Brian Harnetty.