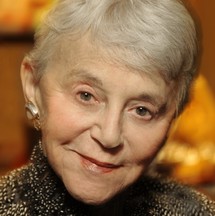 Social, educational, and environmental philanthropist Eva Haller was 12 years old in 1942 when she joined her older brother, John, in the Hungarian resistance. At night they worked in a secret printing press hideout, making anti-Hitler leaflets and then distributing them throughout Budapest.

When her city was occupied by German forces, and the Jews were being rounded up to be sent to a horrible fate, Haller faced off a Nazi officer and convinced him she was far too young to die. He miraculously let her go, and she remained in hiding throughout World War II.

Just months before Hungary was liberated, Haller’s brother was killed as he was crossing the Yugoslavian border to join Tito and his partisans. In his memory, she dedicates her life to those in trouble, acting as both philanthropist and advocate.

Haller immigrated to the United States. She cleaned houses during the day and went to school at night, earning a Masters Degree in social work from Hunter College.

In 1965, she joined Dr. Martin Luther King’s Selma march which galvanized her activist spirit and bonded her heart to the pertinent movements and issues of her new country.

She left social work to start a marketing company with her late husband. Their company was among the first to advocate for women’s issues. By 1968, the team had earned an enormous sum for the time: $1 million. The couple left to volunteer with UNICEF to work in Southeast Asia.

After their return to the United States with a renewed commitment to women’s issues, they reopened their business. The proceeds of their success allowed Haller to pursue the philanthropic projects that she says are her life’s purpose. “My life has always been a response to perceived need,” she says.

A dedicated activist, Eva has served as a member of the boards of many non-profits, including the Jane Goodall Institute and Women for Women International. She is a trustee of the University of California at Santa Barbara Foundation, the Rubin Museum of Art, the Creative Vision Foundation. Eva is Board Chair of Free the Children USA, and board Chair of Sing for Hope. She also serves on the board of A Blade of Grass, Culture Project, and Video Volunteers.

She has received numerous Humanitarian Awards in the USA and throughout the world.

Eva continues to promote peace and social policies and helps mentor others to do likewise.