Stephen Pritchard first responded to our Growing Dialogue discussion via Twitter, in conversation with Jethro Brice and Mark Leach. The following response was originally published on his blog, Colouring in Culture, on October 19th, 2014, and is reprinted here with his permission.

A Blade of Grass is a great online resource for socially engaged artists – frequently a site for interesting discussion and debate in and around the field. The Growing Dialogue section of their website is, in their words, a place for “moderated online debates among thought leaders in social practice.” The latest strand of debate is entitled The Latest Thing. It’s about the relationship “innovation” may have to socially engaged art. For me, it’s infuriating. There’ve been a string of posts and comments about “innovation.” I interjected via Twitter early on, after the first provocation was published. This blog post is my response to the ongoing discussion. I don’t want to rehearse the arguments made in the series of posts on the website by various “leaders” (I dislike the term) in the field. I prefer to explore the discourse of “innovation” in relation to the arts, socially engaged practice and social justice as another way of thinking about the (apparent) “latest thing.”

When curator and critic, Elizabeth Grady, opened the discussion with her blog post “Interrogating Innovation in Socially Engaged Art,” I responded, via Twitter, as follows:

For me, ‘innovation’ is, today, too closely linked to neoliberalism. Radical action and justice shape socially engaged art?

Jethro Brice said in reply that we should “drop the ideology of innovation” and “keep pursuing creative, discursive, engagement.” I said that “innovation was not a term that sits comfortably with social practice.” Mark Leach summed things up with the brilliantly simple, “I’m down with dropping ideologies.”

A flurry of further posts followed. I’m not going to discuss any of these posts in detail. Their titles give a flavor:

“What Are We Trying to Get Ahead of?: Leaving the Idea of the Avant-Garde Behind” by Jen Delos Reyes

“‘Innovation’ in art and capital” by E. C. Feiss

“Notations on Innovations” by Carin Kuoni

“Radical or Reactionary: The Value of Innovation in SEA” by discussion initiator Elizabeth Grady

“What’s New Pussycat?: Socially Engaged Art and the Institution” – a contribution that takes the discussion towards the institutionalization of socially engaged art by Jen Delos Reyes (a point that I will pick up shortly in a separate post)

The problem I have in this debate is the word “innovation” and how wholly or partly it is happily or doubtfully accepted as a driver of modern art, the avant-garde, socially engaged art, social change, social justice, etc., etc. Innovation is, according to Elizabeth Grady, “often found under its more common moniker, ‘change’.” This blurring is extremely problematic. Innovation is not the same as change. It is also worth clarifying that notions of “the ideology of innovation” are problematic. Innovation is not an ideology but its use is ideological. Grady, in the same sentence in which she conflates innovation and change, also states that, “the assignment of value—good or bad—to the term ‘innovation’…is ideological.” Innovation is used as a foil for several ideologies, as we shall see. But, for me, innovation is not a term that relates (or at least should be related to) socially engaged art.

Socially engaged art is about working with people to explore and create experiences; about activism; about spaces and places; about dissensus, tension, oscillations; even aesthetics (in the broadest sense of the word). Social practice can be about technology. None of these things involve innovation. We do not innovate. Instrumentalized participatory art isn’t innovative either. It’s just another way of appropriating art done to, for, or with people to support soft state power; a means of selling meager forms of top-down “social change.” Social justice is never about innovation either. Modernism wasn’t about innovation. The avant-garde movements were not innovators.

Innovation is creeping, insidiously, into every aspect of life. Clearly, as is apparent in this debate about “the latest thing” in socially engaged art, innovation is also infiltrating this field (at least in the minds of some people). It’s now popping up like bindweed, twisting around the discourse of Arts Council England and other arts institutions. The expansion of digital technology and Big Data into “the cultural industries” is undoubtedly one driver; the need to measure and better advocate for the arts another. The commonality: capitalism. That’s why it’s important to carefully explore what “innovation” actually means, its origins and how the word is commonly used.

Are “innovation,” “innovate,” “innovative” words loaded with meaning? Certainly. Are they commonplace nowadays? Definitely. Has this always been the case? No. So what’s changed?

Innovation is almost a de facto requirement in every aspect of our lives: from marketing to policymaking; manufacturing to business management; economics to education; and, of course, arts and culture. The word tends to be associated with “newness” – new ideas, new technology, new systems, new things, etc. It is very closely related to technology. Unsurprising, then, that the usage of “innovation” has increased (and continues to increase) exponentially since the 1960s. So what does the word mean? A glance at the Oxford English Dictionary entry for “innovation” reveals it has (or had) several meanings. It is commonly defined as:

The modernist movement in art might, in some (aesthetic) cases, be considered to fit with this description. The avant-garde artists would be horrified. Innovation in modern art is a concept tied to the formalist and historically linear theories of Clement Greenberg – to his 1939 essay Avant-Garde and Kitsch. The trouble is that innovation is a term frequently applied to modernist art, to society, history, etc. retrospectively, of in place of words like “invention” or “creativity.”

Linked to the notion of innovation is “disruptive innovation” or “obsolescence.” Progress of “the new” quickly relegates the old to the scrapheap. This brings me to my root problem with innovation: today it is irrevocably linked to technology and thereby to consumerism. We are led by neoliberalism to believe innovation will eventually lead to salvation. It will not. Innovation will not lead to emancipation, nor equality, nor social justice, nor new forms of truly democratic living. Innovation will lead to the new that soon becomes the old; not necessarily better (whatever that might mean). I might seem that the cycle of innovation will never be broken. It will. It is just a word. A word which has engrained within it its own demise. Innovation will become obsolete, replaced by something else, something similar, something newer.

So to ascribe a word like “innovation” to socially engaged art is a misnomer. An attempt to subsume an area of contemporary art practice that resists and challenges notions of the art market, of art as economic, of audiences as consumers, etc. into the mainstream, increasingly capitalist system of “the culture industry.” Many forms of the field (which I tend to label participatory art) are happy to be instrumentalized and justified for their supposed economic benefits. That’s fine. But, for me, there’s no place for “innovation” in my socially engaged practice or my research. Socially engaged art is not “The Latest Thing.” Be suspicious of those who suggest otherwise.
Find Stephen Pritchard on Twitter at @etiennelefleur or via his blog, Colouring in Culture. 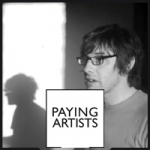