When artists are introduced into city planning, it’s often most convenient to structure it from an economic or urban development perspective. Artists certainly beautify the spaces they inhabit or are invited to, but they also have a unique skill set to reimagine systems, communicate nuanced and complex information and ideas, and expand the empathetic capacity of city employees and residents. Beyond the designing and decorating of spaces and structures, many examples can be found in the “Municipal-Artist Partnership guide,” a newly launched website designed by A Blade of Grass and Animating Democracy, a program of Americans for the Arts. Created from three years of research, and months of beta testing, the MAP guide features dozens of surprising and compelling case studies on artists working within city governments, as well as nuts and bolts like sample contracts and proposals that can help socially engaged artists, and any city agency, anywhere, collaborate. Here are three benchmark examples taken from the MAP guide intended to inspire new ways of imagining artists’ roles and the capacity of city agencies to engage in this relational, rather than transactional, work. 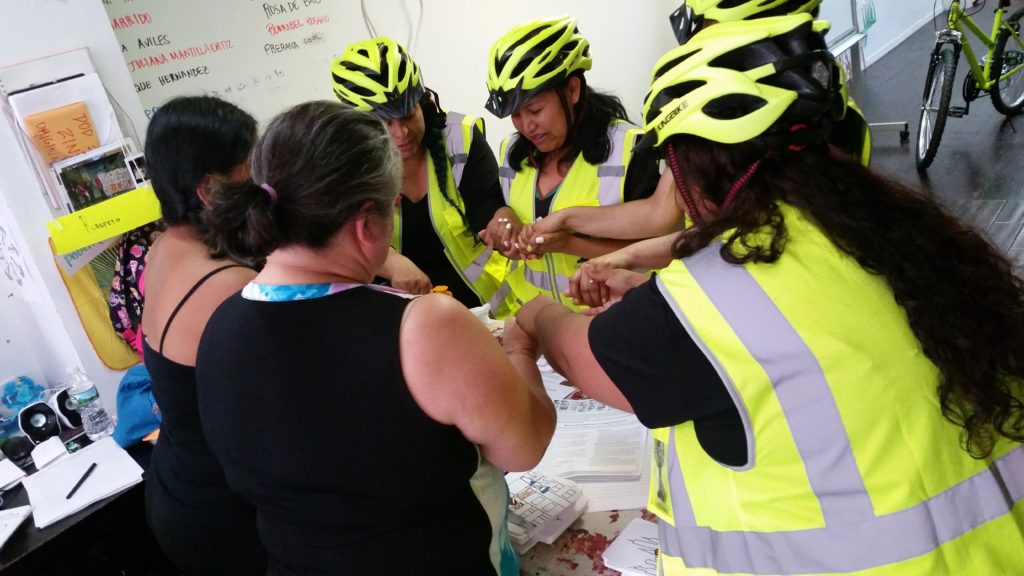 In 2016, artist Tania Bruguera was selected to pilot New York City’s Public Artist in Residence (PAIR) program managed by the Department of Cultural Affairs. Intended to leverage the unique, creative problem solving abilities of artists to rethink underutilized city services, PAIR also provides artists with professional opportunities typically not available to them through a one-year residency embedded within a city agency and $40,000 stipend. Bruguera’s project, Cycle News, sought to counter the distrust and disengagement between the immigrant community and the Mayor’s Office of Immigrant Affairs (MOIA) by collaborating with the art/organizing collective Mujeres en Movimiento. After receiving training on immigrants’ rights and available resources, the Mujeres and Bruguera designed pictographic info-sheets, hand distributed by the Mujeres across the borough of Queens with the help of a fleet of neon yellow bikes. A visible street presence where residents typically congregate to shop and socialize, the Mujeres had conversations with 7,000 people, received more than 2,000 surveys, and passed out 18,500 pamphlets. In a press conference, Bruguera called the project “one of the best experiences I’ve had in my life as a citizen and as an artist,” summarizing the need for these kinds of collaborations, “we were talking about trust and how they wanted the immigrant community to trust the government—but, trust is a two-way street.” 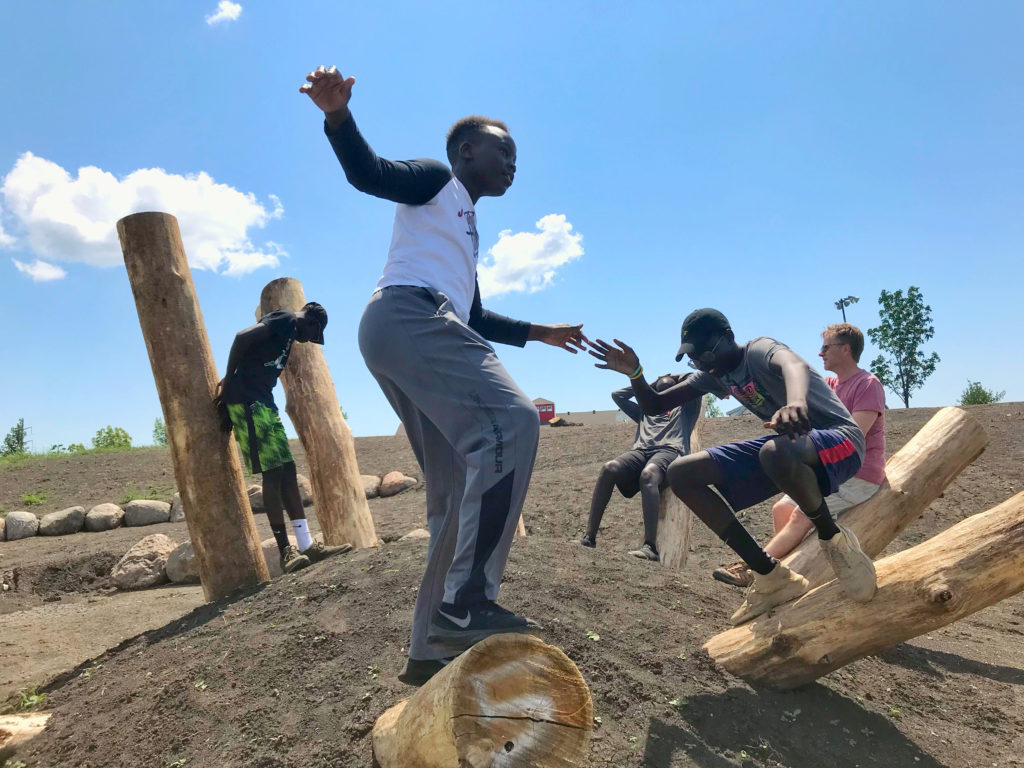 Located on a flat-plain bordering a river, Fargo, North Dakota manages its flood-prone location with stormwater basins. While ecologically-sound and critical to the city’s infrastructure and safety, these expansive spaces sit empty and barren most of the year, creating a burden for adjacent neighborhoods with long, circuitous pathways for moving around them. In 2010, ecological-artist Jackie Brookner piloted a project with city planners and engineers, dozens of community groups, and hundreds of residents to first imagine and then transform the 18-acre stormwater basin into a viable and beautiful neighborhood commons and multi-functional open space. Engaging more than 100 local institutions and city-groups, Brooker led the innumerable stakeholders through a rigorous design process, vetting and testing every major idea posed to achieve a space that would not only serve but reflect the diverse community. Brooker, a New York resident, also tapped five local artists to conduct outreach, particularly to residents living around the stormwater basin. Construction of the World Garden Commons completed in 2016, structured by the ideas reached in consensus: more plants, spaces for celebration, areas to exercise, and an emphasis on the elements. The formerly muddy eye-sore now boasts native prairie and wetlands, walking paths, an overlook, and a community garden. The city is investigating opportunities to similarly transform other stormwater basins. Brookner, who tragically died in 2015 before the Commons was opened, is remembered in Fargo for her genuine commitment and compassion for the community. 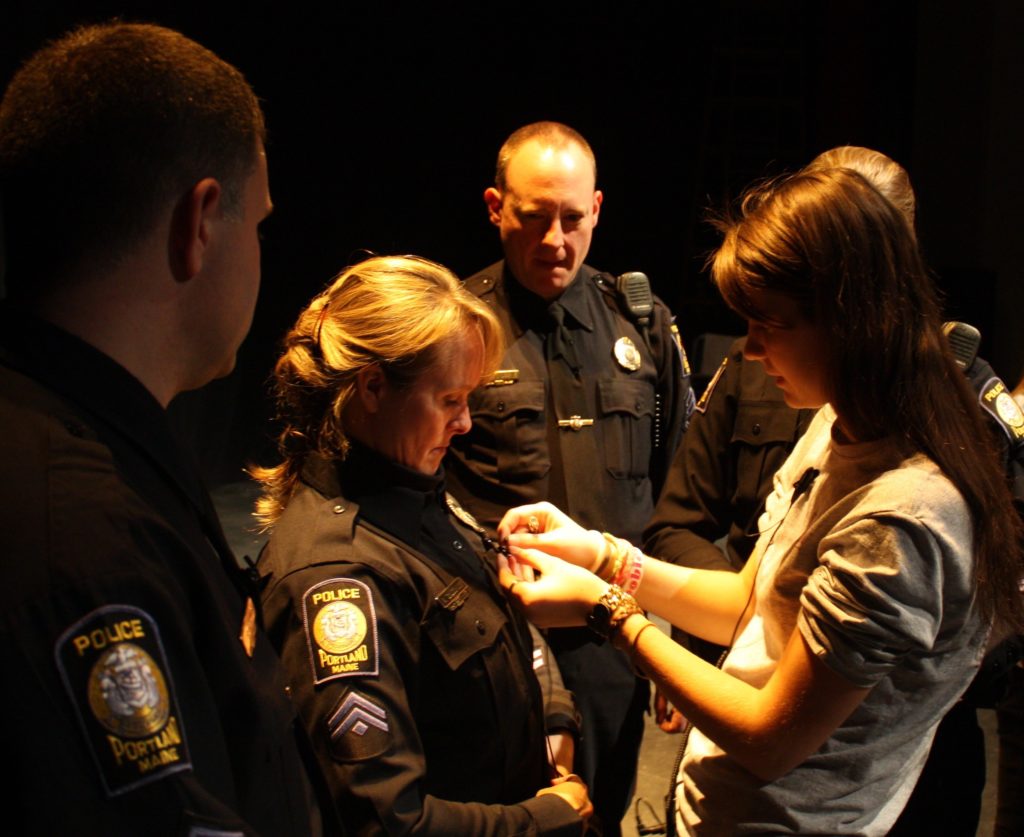 3. Engaging Police In Self-Expression to Improve Morale and Community Trust in Portland

While they share alliteration in name and observational skills by trade, these are likely the only apparent overlaps between being a poet and being a police officer. One vocation is based on private introspection and flexibility, the other, public service, and regimented adherence. However, after low morale and fractured community relationships were identified as issues within Maine’s Portland Police Department, civic artist Mary Pottenger, who had initiated Art At Work within the city’s agencies at the Mayor’s invitation, paired 10 police officers with 10 poets and photographers. The officers and artists spent time together on ride alongs, at police headquarters, as well as in workshops, and creative writing exercises. When one officer joked, he’d rather fight four guys at once than try to sit down and write poetry, poet Annie Finch replied, genuinely, “Me too. Writing poetry is hard.” The resulting poems and photographs were used to create, Thin Blue Lines, 2009 and 2010 calendars sold in the community. Initially conceived of as a fundraising opportunity to benefit the family of a deceased police officer, the collaboration became a broader internal and community dialogue with thousands of calendars sold and numerous public poetry reading events held. For its second year, police participation in the calendar project increased 300% and 73% of participating officers reported that it had improved morale. The acting Police Chief at the time, Joe Loughline, explained this unexpected shift, “We had no idea the outcome would be this outstanding. The photographs in the hallways, reading poems at roll call—it’s brought us a different sense of who we are and what we do. It’s changed a lot of minds about the police and about poetry.”