Curating as Caring: Tending to Partnerships Between Artists and Communities 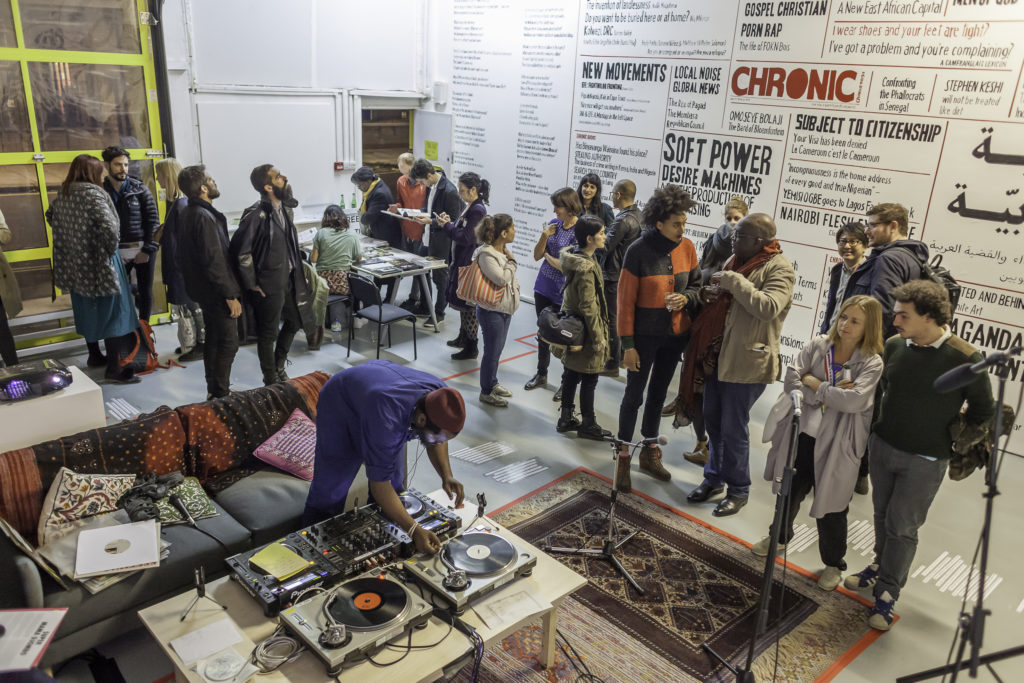 Jan Cohen-Cruz: Elvira, would you tell us a bit about the role of the curator as traditionally understood and how it is the same or different at Creative Time, where you were Senior Curator until December 2018? It may be useful for our readers to know that Creative Time includes among its three core values “the role of the artist in shaping society,” so I am also wondering: in your role there, who beside the artist is needed to be aligned with that goal?

Elvira Dyangani Ose: I always go back to the origins of the term “curating,” or “to curate:” curare, avere cura, “to take care.” Historically, the curators were keepers, scientists, in charge of the managing, preserving, and displaying of objects and artworks in a museum or a private collection. They hold historical and aesthetic expertise about the art from a region or an era; they were, for better or for worse, their interpreter. As such, they were trained as historians, art historians, or philosophers. Occasionally, they achieved scientific knowledge and methodologies to analyze and preserve the integrity of artworks and objects—and as such, they could be archaeologists, conservators, or restorers. Besides that, fast-forwarding centuries into a much more specialized field—which includes artists as curators, philosophers as curators, curators as artists; the institution of a canon (Western canon, primarily) and the multiple attempts for its distortion; various waves of institutional critique; the renewal of certain narratives to bring about change and inclusion, etc.—the figure of the curator still involves a lot of caring.

While at Creative Time, I formulated projects that aimed to continue an incredible legacy of initiatives that considered public space as a platform for the encounter of art and citizenship, creating opportunities for social engagement, critical discussion, and aesthetic perusal. Implicit there is the consideration that artists have a role to play in shaping society through the politics of their practices, but they are only one group in a large equation which involves other cultural agents; many parties within cultural, institutional frameworks and beyond; and audience and non-audience—one shouldn’t underestimate the transformative capacity of an individual passerby! To respond to your question more directly: everyone is needed if we are to transform our society in this critical political juncture. Artists exercise their expertise to give visibility to theirs and others’ concerns, fears, and aspirations; to give voice to theirs and others’ histories and stories, current issues, and speculative futures.

Cohen-Cruz: This issue of A Blade of Grass Magazine is focused on “who” is needed to make socially engaged art? How would you respond to that as Director of The Showroom, given their collaborative and community-based approach?

Dyangani Ose: In a recent conversation with Nikolay Oleynikov, member of Chto Delat, about their radical art education initiative, The School of Engaged Art, we measured what was commonly understood as “socially engaged” art, which they prefer to call “engaged,” simply understanding that art is essential for human becoming. For them, that engaged position defines the role of art in society. They formulate a hybrid program of education operating in a particular context, aiming for the transformation of their immediate environment—for them in Russia today, the threat to its democratic freedom and lack of criticality of their cultural institutions.

For us, that immediate environment is the Church Street area in North London, where The Showroom has for almost a decade fostered experimental practices and reflected upon everyday life through its engagement with the local community and advocacy for international trans-disciplinary forms of arts and education—especially through a project initiated by my predecessor, Emily Pethick, called Communal Knowledge. Under the umbrella of Communal Knowledge, we have created collaborations between artists, residents, and community groups built on trust and respect. One of those examples is our relationship with the Penfold Community Hub, which hosts a collective medicinal garden conceived by Uriel Orlow and constructed in collaboration with gardener Carole Wright, Church Street Bengali Women’s Group, Penfold Hub Gardening Group, residents, and center-users. All these events and conversations developed in the lead-up and were a fundamental part of his exhibition, Mafavuke’s Trial and Other Plant Stories, in 2016. In the context of my vision for the organization, Communal Knowledge will become a leading principle and a way of rethinking a new institutional methodology, in which incorporating long-term research projects into its existing community initiatives will be paramount. 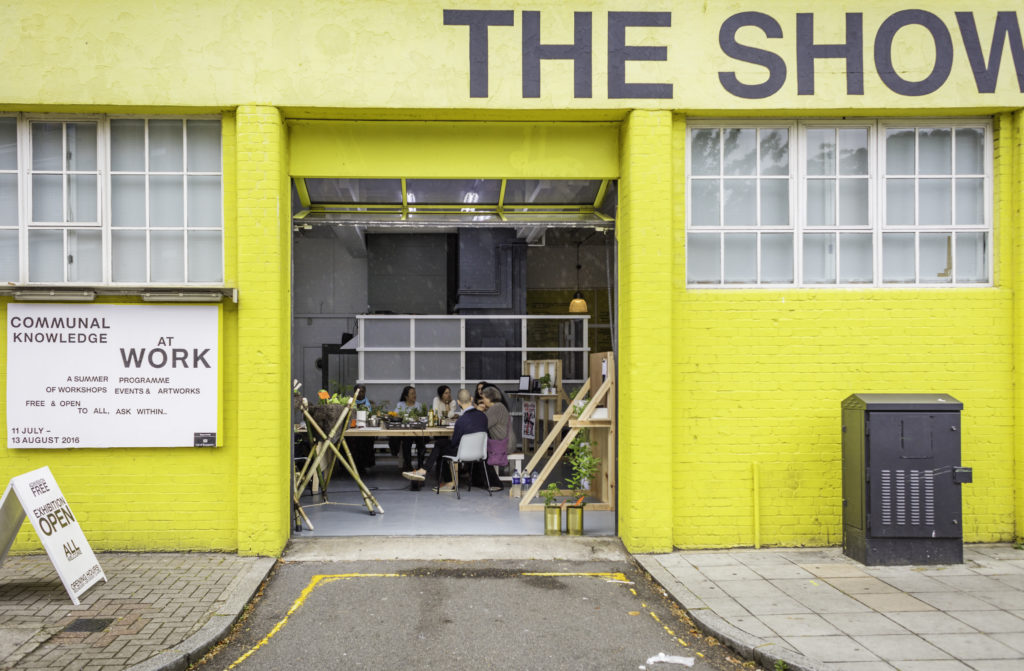 Putting the Medicinal Garden to Use, a 2016 workshop by Uriel Orlow and Jeanne-Lyse Sibaud as part of Communal Knowledge at The Showroom. Communal Knowledge invites artists and designers to work collaboratively with community groups, organizations, schools, and individuals from The Showroom’s North London neighborhood. Photo by Dan Weill.

Every activity at The Showroom would aim to generate the formation of a temporary diverse community, bringing together art and non-art audiences, and inviting them to take part in decision-making processes about exhibitions, local initiatives, events, and workshops. The objective is to create close collaboration through institutional partnerships—as it has occurred so far—but also to bring together local expertise and intelligentsia, collective experiences of individuals and groups. To that extent, the program would formulate an “exportable” methodology, a communal knowledge, through the vast range of display and the artistic experiences and encounters it would provide. In that respect, the role of various formal and informal centers of research and groups, as well as academia, would be fundamental to the constitution of a sustainable network for research and applied knowledge. Open to art and non-art audiences, locally and at large, projects will aim to produce multiple art forms, trans-disciplinary research, and new structural institutional challenges in which a new sense of leadership and agency could emerge.

Cohen-Cruz: I understand that you often tend to live—even if temporarily—in places where you’re curating because, as you said in an interview, “I believe it is important for the curatorial experience to embrace context: the place, the communities in that particular area, the people, and the people in the institution I work with.” Please describe the impact of the people from the area and from the institution in your curation practice.

Dyangani Ose: Many contemporary biennials request their curators or artistic directors to live in the city where the event is taking place. In that requirement there is a clear investment in locality, an intention to formulate the hosting city as a platform. I believe it is essential to know the context in which your project is going to develop, even more so if your endeavor is temporary. It should be permeable to local issues and communities. It is not a condition, but I think biennials have to serve to bring under the spotlight issues that are fundamental to the local that could be relevant to an international viewer. A balanced equilibrium of that is my perfect scenario. Audience is at the core of the projects that I do; I always try as much as possible to be in dialogue with artists and colleagues to formulate the exhibition space as a place to be inhabited.

Cohen-Cruz: I read that you and the artists “talk with communities and individuals, questioning their specific concerns or a specific contingency of the time, and all of a sudden that is under the spotlight at the time of the exhibition . . . What you need to do to find these important voices is to go where they are, to have a conversation with the people that are there. It’s important to do research. You have to be in the field.” Why do you as a curator need to be “in the field?”

Dyangani Ose: That goes back to the issue of caring. If you do not care, if your curatorial project does not have a sense of urgency, why bother to do it in the first place? I’m not saying that art is capable per se of bringing about social change or providing solutions to some critical concerns, but it formulates awareness, it creates visibility, it distorts the socio-historical processes; it can formulate something larger than art itself, something that affects us all. It allows the chance to ponder questions, it offers uncertainty as a political position, here to be understood as a reflective place from which to start a debate. Ultimately, it reminds us that our sense of determined rights and other things in our lives that we believe are certainties, are not always guaranteed. It keeps us alert without forgetting that it also has the potential to envision a myriad of new imaginaries and possibilities.

Elvira Dyangani Ose is the director of The Showroom, London. She is a lecturer in Visual Cultures at Goldsmiths, a member of the Thought Council at the Fondazione Prada, and an independent curator. She recently curated Basilea, a Creative Time project commissioned by Art Basel and Laura Lima’s Horse Takes King. She curated the eighth edition of the Göteborg International Biennial for Contemporary Art (GIBCA 2015) and International Art at Tate Modern (2011–2014). She recently joined Tate Modern’s Advisory Council.